No time to walk through the tutorial? Test this prompt out here.

When most of our days are spent reading or typing text, it can be really easy to accidentally overlook a grammatical or phrasing error. Using a language generation tool that is trained to correct common errors can help reduce the amount of time that is spent proofreading and free up some mental space for other tasks. In this tutorial, we will be building a simple prompt to help achieve this!

It is important to note that this prompt is designed to address common grammar, spelling, and punctuation errors — there are instances in which it would not provide sufficient correction. For this reason, it has been designed to provide a suggestion as opposed to a definitive answer.

When you are ready to create your prompt, click AI Manager > Prompts > Add New Prompt, and fill out the following:

Tags and Intelets can be left blank. 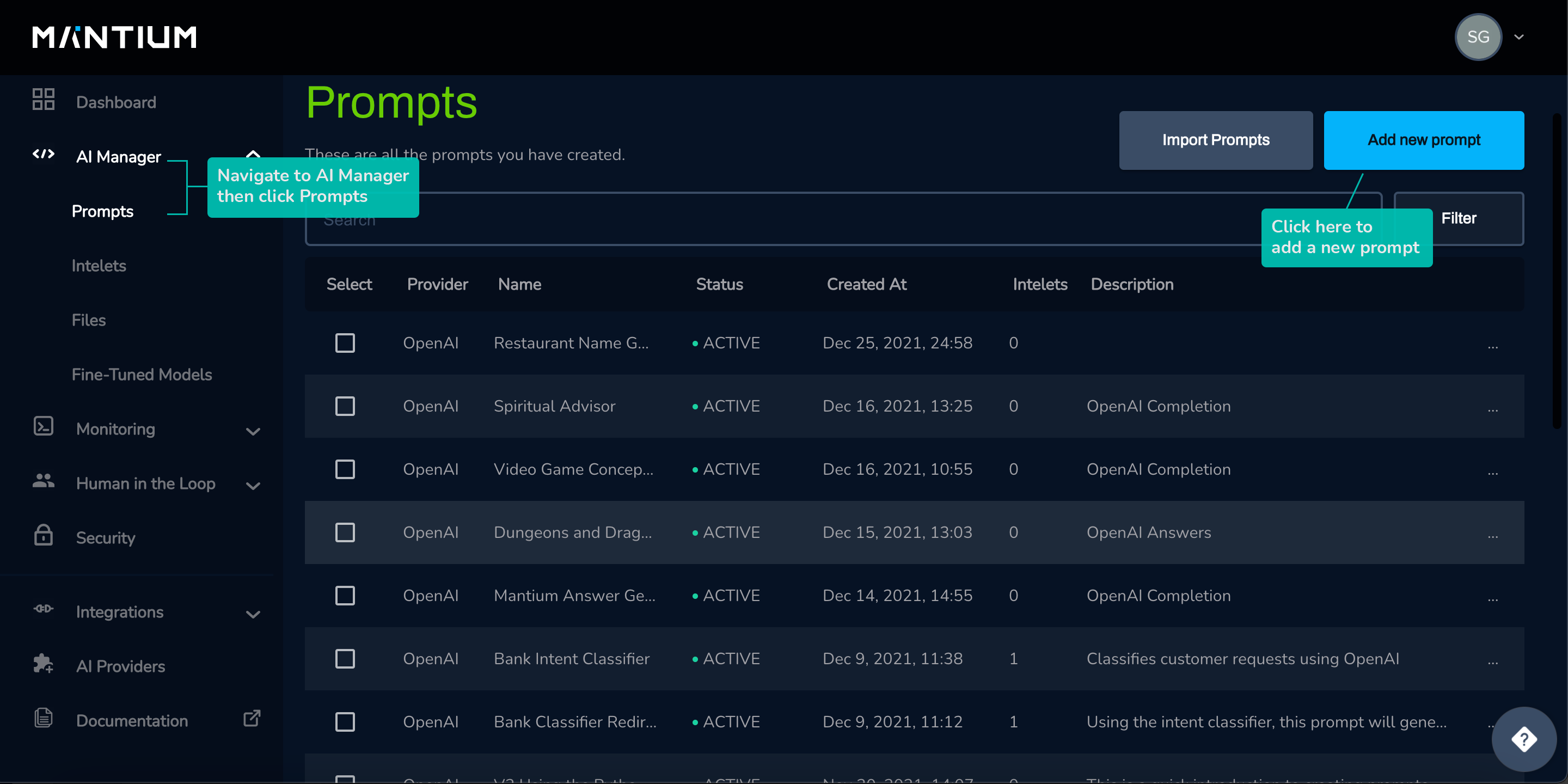 We have prepared a text snippet for you to paste into the prompt line — it contains a series of entries with an incorrect sentence, followed by a corrected version.
When pasting, please be sure that there is no additional whitespace after "Incorrect: " (with one space after the colon) at the end of the text. Language models are sensitive to all characters, including spaces.

Then, select an engine.

The prompt body itself is a series of sentences that contain grammatical and phrasing errors in the English language. The sentence that needs correction is labeled as Incorrect:, followed by a suggested correction labeled as Suggested:. Because the English language contains homophones, or words and phrases that sound the same but mean different things, there is still potential for error with AI-powered correction. The more examples that are provided, the less likely an inaccurate correction is to be returned.

Max Tokens controls the length of an output response. The count should be adjusted for the general expected length of the input and output. A “token” is approximately .75 of an English word, so this prompt would stop at roughly 75 words.

Temperature controls “creativity” - higher temperatures will produce more creative outputs but are less likely to adhere to structure. A lower temperature is advised for a prompt that requires a well-defined response, as the model will choose words with a higher probability of occurrence.

Top P is another way to control "creativity" using a different probability method. Setting Top P to .1 means that the model will only consider the words with top 10% probability masses as potential outputs.

Stop sequences are another method of controlling output - they allow you to define any text sequences that force the model to stop. If you don't have a stop sequence, the model might generate a stream of the requested response length or it may stop in the middle of a sentence.
Using "###" provides delineation that is clearly visible and not often present in natural language.

Because these models are stochastic in nature, the resulting output will vary even when using the same input, but we have included a text snippet to run as a test:

There is still a chance that using the same input multiple times may yield a different output. However, configuring the prompt with a low temperature and small value for Top P will help increase consistency of the output. We suggest clicking Test Run multiple times and tweaking the values of Temperature and Top P to test output consistency as needed. Once you are satisfied with the results, click Save.

Homophones are especially challenging to detect even in written text because the spelling and word arrangement may look correct despite them being misused grammatically. This use case particularly benefits from being provided with specific examples of phrasing errors, and will become more effective with specific examples of corrected sentences. For further exploration, it could be useful to try fine-tuning a model on a file containing many more examples beyond the ones provided in this prompt body.

Mantium enables sharing your prompt using the One-Click Deploy feature, located in each prompt's drawer view. From your list of prompts, click on the Grammar Improvement prompt, click Deploy , and add the following configuration settings:

After deploying your prompt, you will have a unique URL that you can share for others to interact with it. To interact with the prompt, a user should input a phrase or sentence that may contain grammatical errors for the model to correct. 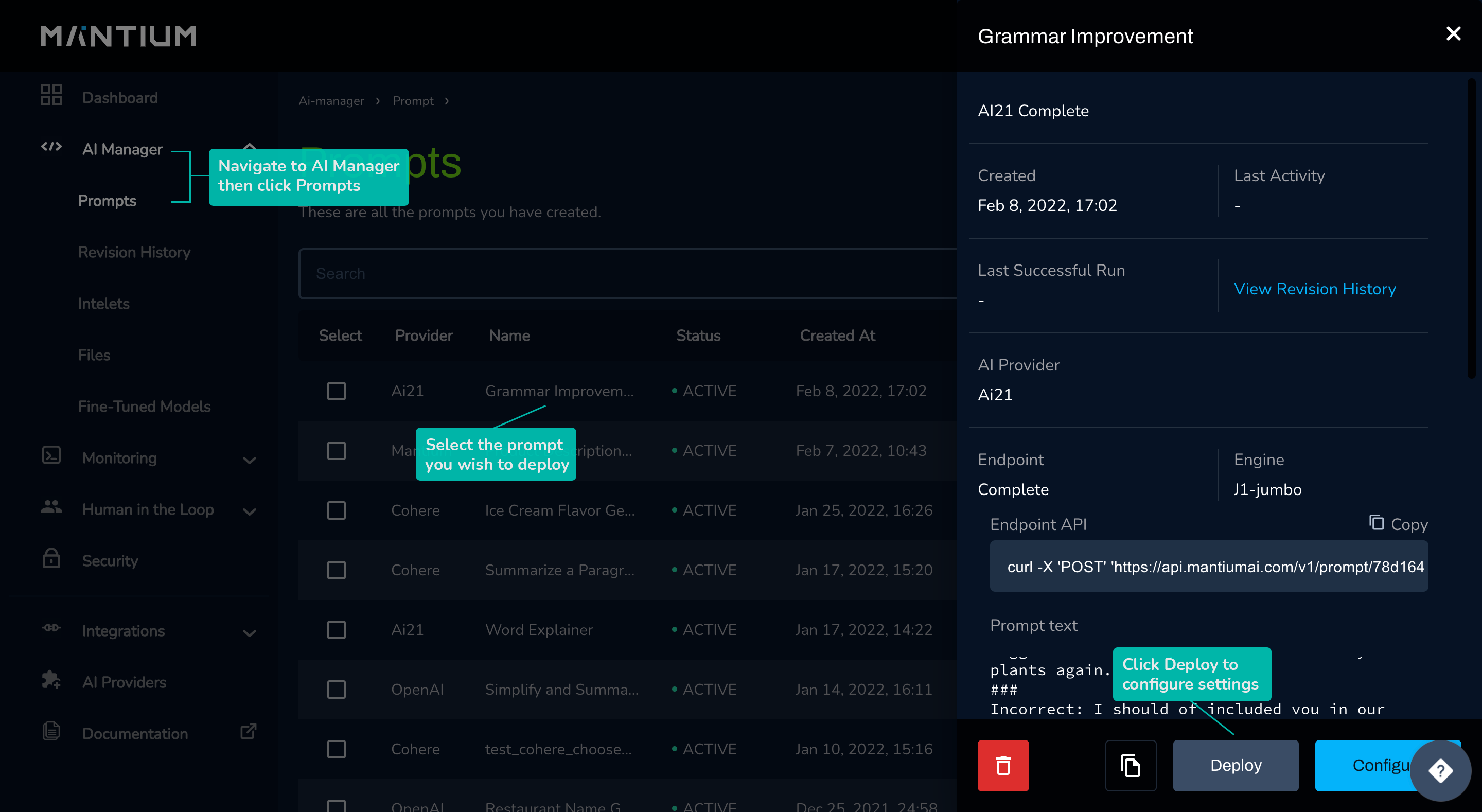 To test out the prompt that we have configured, click this link!

Language models don’t have to only correct grammatical or phrasing errors. Given enough data, it would be possible to configure a model to help reduce word redundancy, or change the tense or language used. We encourage you to explore other creative options for improving your writing!

Possible examples could include: